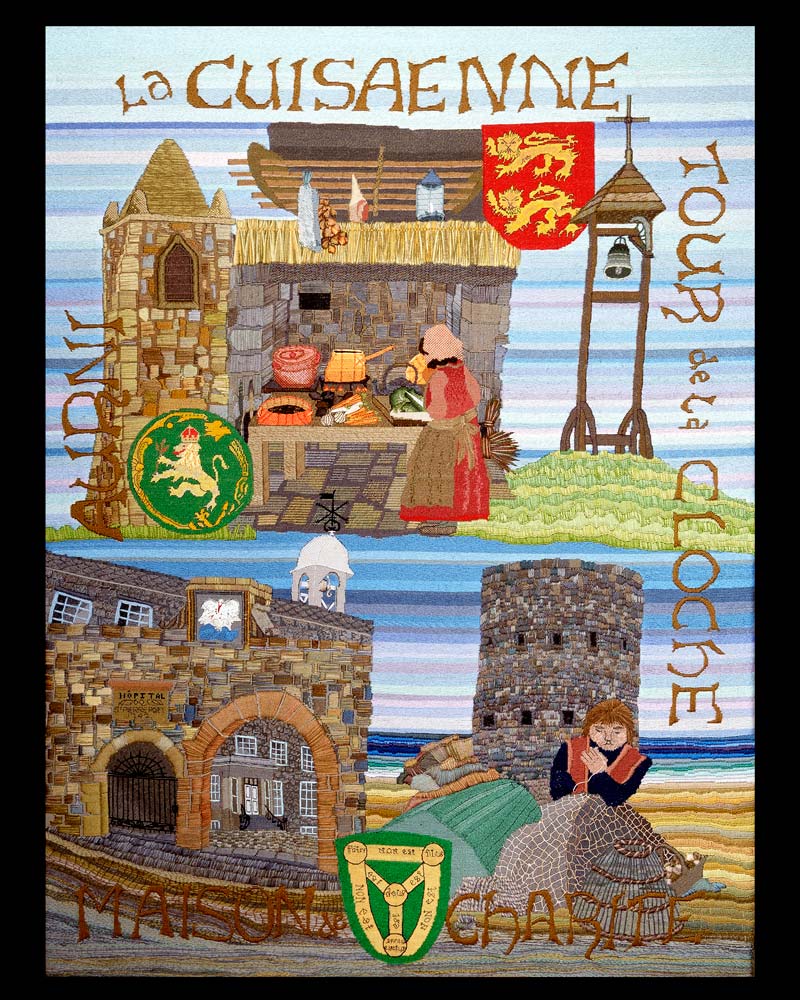 Become a Friend of The Guernsey Tapestry

If you have a large party, please email us at info@guernseytapestry.org.gg and we shall if we can open specially for you.

We have English, French, German, and Dutch audio guides.

Sue Payne put forward the original concept for the Tapestry at a Millennium Ideas Forum. Although the idea was not taken up as an official project there was a great deal of interest and so a committee was formed to run it as an independent self financing project.

Valerie Chandler was commissioned to do the artwork. Her brief was that the Tapestry was to illustrate the last 1000 years of Bailiwick history in ten Panels, with each one covering a century. The final size of each Panel was to be 4' x 3' (1.22m x .91m). A century-by-century breakdown of important events was obtained from local historians, along with information on costume and culture and the archives of the Priaulx Library and the Guille-Alles Library provided visual reference of these. As so much time is covered in the ten designs many events are recorded around the edge of each Panel in the Norman language Guernesiais, also known as Guernsey-French.

Jenneth Fitzgerald coordinated the stitching, and selected the yarns and types of stitches to be used. The stitching was worked by teams of regular volunteers. There were around 215 regular stitchers who worked two hours at a time. In addition to this everyone on the Islands had the opportunity to put in a stitch. The Panels were taken to schools and residential homes and to the other Islands to ensure that as many people as possible could participate. As a way of raising money members of the public paid £1 to add their stitch, and then received a certificate.

Stitches were chosen to convey the texture or pattern of the object they illustrated. There are over twelve different types of stitches used. This variety of stitches gives the finished canvases a three dimensional quality, and the combination of colours capture the atmosphere of the Islands.

When the stitching was completed Sally Parks, a textile conservator, carried out the blocking and mounting of the completed Panels. This was essential to ensure the longevity of the Panels.

The stitching for the project took over two years. The first stitch was placed on Wednesday 4th September 1996. The regular stitching took a total 25 hours a week, over the next two years, with the last stitch being placed on 6th December 1998. Including the production of the artwork, the stitching and mounting, each panel took approximately one year to produce.

The main objectives of the Trust are to preserve the Tapestry on behalf of the people of the Bailiwick and to promote it as part of our local heritage, encouraging education and understanding of the history of Guernsey.

The Millennium Tapestry Trust is a Member of the Association of Guernsey Charities, No. 245.

The Guernsey Tapestry was awarded a commendation by the Association for Heritage Interpretation in the Interpret Britain Awards 2002.